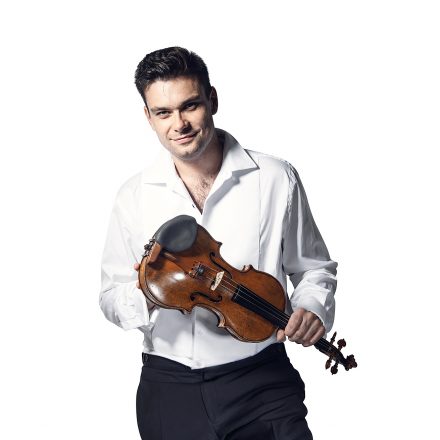 Concert during the Week of Czech – Slovak reciprocity

Jiří Vodička, first violin with the Czech Philharmonic, soloist, and chamber musician, is one of the most prominent and most sought-after Czech violinists. Already as a child he made a name for himself by winning prizes in many Czech and Slovak competitions for young artist. In 2004 he carried off the prize as overall winner of the International Louis Spohr Competition for Young Violinists in Weimar in Germany. In 2008 he brought back first and second prizes from the world-famous Young Concert Artist competition, which took place in Leipzig and New York.

Exceptionally, Jiří Vodička was accepted at an institute of higher education in Ostrava at the age of only 14. He studied there under the renowned teacher, Prof. Zdeněk Gola, and graduated with a master’s degree in 2007. He regularly performs as a soloist with many leading orchestras both in the Czech Republic and abroad. In 2015 he became first violin with the Czech Philharmonic. He teaches at the Prague Conservatory and at Ostrava University.

In 2014 he recorded his debut solo album Violino Solo with the Supraphon company. It contains some of the most difficult compositions for solo violin. Many of his concerts have been broadcast by Czech Television, Czech Radio, and the German ARD broadcasting company.

As a chamber artist he performs together with the leading Czech pianists and since 2012 he has been a member of the Smetana Trio. In 2011 he was invited by the famous violinist Gidon Kremer to perform at his Kammermusikfest festival in Lockenhaus, Austria, together with many world-famous artists.

He plays an Italian instrument made by Joseph Gagliano in 1767.