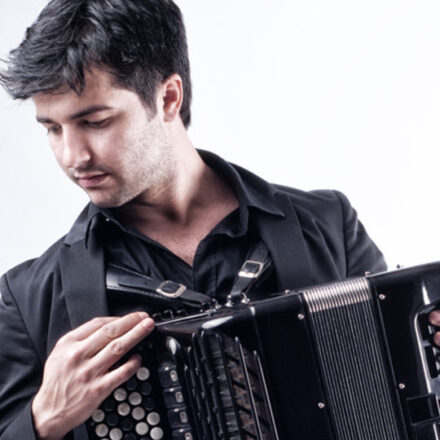 Srdjan Vukasinovic has established himself as one of the leading performers of the accordion in the world today. His fresh, innovative, and versatile approach to music has led to a reputation as a great concert master who can always satisfy the curiosities and needs of all different kinds of audiences. He is always bringing new ideas and methods in his performance, based on improvisation and combining different musical genres with jazz and world music.

As a young musician, he won the first prize at one of the most important competitions for accordion – the World Trophy in Spain in 1999, giving to him the title of the best accordionist in the world. As a sought – after soloist performs with orchestras such as Agrovia Philharmonic, Klassik Nuevo Orchestra, Belgrade Philharmonic Orchestra, Zürcher Kammerorchester, Südwestdeutsche Philharmonie, etc. In October 2018 he had concert with the London Royal Philharmonic and he became the first accordion player who performed with them.

Srdjan Vukasinovic has invented the first quarter – tone accordion in the world. With this multi – tuning accordion, it is possible to play 24 tones in one octave. Also, there is a possibility to combine many different tunings at the same time (for baroque, modern, oriental music etc.). One more of Srdjan’s innovations is his new accordion brand „ Carboneon “. This innovative instrument is the first one made from carbon fiber, which renders Carboneon the lightest accordion in the world.