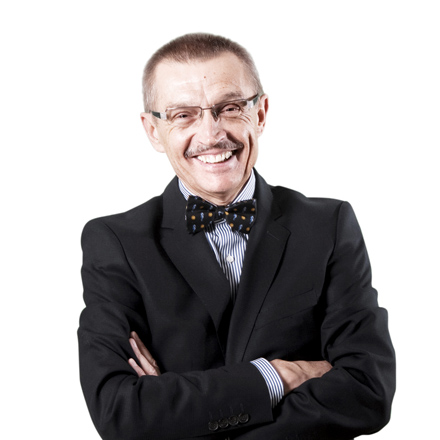 Emil was born in Olomouc, Czechoslovakia (now the Czech Republic), where in 1971 he graduated from Palacky University with a degree in mathematics. While a student he devoted much time to playing jazz piano. In 1974, he was awarded the prize for best soloist at the Czechoslovak Amateur Jazz Festival, and that same year he joined Karel Velebny’s SHQ ensemble. In 1976, he was a prizewinner at the jazz improvisation competition in Lyon, and his composition “Green Satin” (Zeleny saten) earned him first prize in the music conservatory competition in Monaco.

In 1977 Emil was awarded a scholarship to study composition and arrangement with Herb Pomeroy at the Berklee College of Music in Boston. Since his return to Prague he has been directing his own ensembles, composing and arranging . Between 1991 and 1995 Viklicky was President of the Czech Jazz Society, and since 1994 he has worked with the Ad lib Moravia ensemble.

As a pianist, Emil often performs in international ensembles alongside musicians from the U.S. and other European countries. The editor of Rolling Stone Jan Wenner wrote of Emil that “It was a delightful surprise to see such first-class, top-of-the-line jazz in Prague.”

As composer Viklicky has attracted attention abroad primarily for having created a synthesis of the expressive elements of modern jazz with the melodicism and tonalities of Moravian folk song that is distinctly individual in contemporary jazz. Besides this, however, he also composes ‘straight-ahead’ modern jazz as well as chamber and orchestral works. Emil also composes incidental and film music and has produced scores for several full-length feature films and television series. Viklicky’s work has gained him quite a number of prestigious awards.