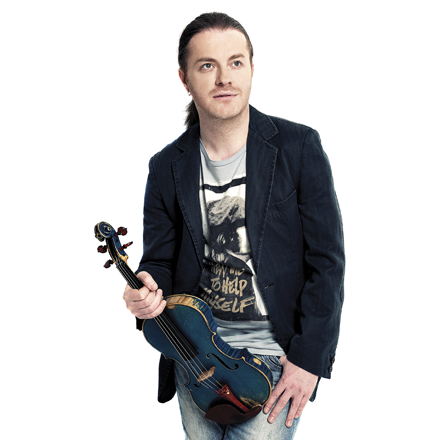 Pavel Šporcl graduated from the Prague Conservatory and the Faculty of Music at the Academy of Performing Arts under Professor Václav Snítil. From 1991 to 1996, he studied in the United States at prestigious schools and universities under the guidance of excellent educators Dorothy De Lay, Itzhak Perlman, Masa Kawasaki, and Dr. Eduard Schmieder. Pavel Šporcl has been triumphantly received by audiences in major music venues throughout the world thanks to the combination of a rich classical background and unique unorthodox stage presence. He has appeared with major orchestras like National Orchestra de France, Tokyo Metropolitan Symphonic Orchestra, Czech Philharmonic Orchestra, Kyoto Symphony Orchestra or New World Symphony Orchestra and also at prestigious venues such as Suntory Hall Tokyo, Disney Hall Los Angeles, Alte Oper Frankfurt am Main, Concertgebow Amsterdam. Pavel Šporcl has performed with leading conductors such as Vladimir Ashkenazy, Libor Pešek, Jiří Bělohlávek, Vladimir Fedosejev, Yan Pascal Tortelier, Andris Nelsons, Jiří Kout, Serge Baudo, Colin Davis. He is a frequent guest on television shows and radio programs.He teaches violin at the Faculty of Music at the Academy of Performing Arts in Prague.